You may have seen TV footage of ‘black smokers’, underwater chimneys that billow dust-like particles into some of the deepest and most volcanically active parts of our oceans. These particles are in fact compounds of metals such as copper, zinc, iron, gold and silver, stripped from billions of cubic metres of volcanic rock by circulating heated waters, then deposited to form mounds of metal sulphides and other minerals around the chimneys when vented into the icy-cold ocean. 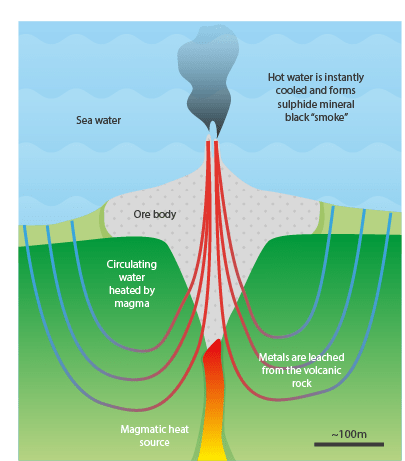 Approximately 90 million years ago, what are now the Troodos Mountains were then the ocean floor and the site of numerous ‘black smokers’. First buried and preserved, then uplifted and exposed by erosion, these ancient mounds of metal are what we call Volcanogenic Massive Sulphide (VMS) deposits. They are not only one of the wonders of plate tectonics and the natural world, but also one of the most important sources of base metals such as copper, zinc and lead.

VMS deposits tend to be compact and can contain copper grades in excess of 2%. They make attractive targets for mining due to the relatively low impact of ore extraction. They are often rich enough to sustain underground mining operations, and the ores are typically simple to process into saleable metal concentrates.

VMS deposits usually occur in clusters, often in close proximity to each other. Examples of VMS ‘camps’ include Flin FLon, Noranda and Bathurst in Canada, and the Iberian Pyrite Belt that runs through Portugal and Spain, where more than 90 VMS deposits have been discovered.

In Cyprus, at least 20 VMS deposits have been discovered, many of which were mined for either copper, gold, or sulphur, or for a combination of these metals. Historically, deposits in Cyprus were discovered because they had surface indications in the form of oxidation. Little or no exploration has been carried out for deposits that lie below the surface, and this presents a major opportunity to modern-day explorers such as Venus.